Have you ever had an event of such serendipity that you simply had to share it with others?  I recently did.  When I was 15 years old I worked part time at the Indian Trading Post in Banff, Alberta.   Hollywood produced a number of movies that summer including Monroe and Mitchum in “River of no Return”, not her best movie, but that’s another story.  I was very fortunate to meet Miss Monroe and that began my lifelong fascination with the actress and her troubled life.  The story I want to share with you consists of an Email I wrote to a playwright by the name of Ken Cameron, telling him about my personal experience with Marilyn Monroe, and his return Email which deals with his play “My One and Only”. 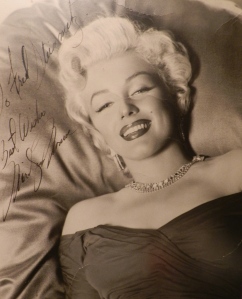 I was pleasantly surprised to hear on the CBC News that a new book entitled “Marilyn Monroe in Alberta” has just been released.  Briefly, I would like to tell you about my connection with this story, and a really odd coincidence that has to do with your play ‘My One and Only’.  My father was chef at the Banff Springs Hotel when “River of no return” was filmed.  We had arrived the year previous to this event happening.  The year was 1953, I was then 15 years old and had found ‘after school’ employment with Norman Luxton, (*1) the owner of the Indian Trading Post which was central to some of the pictures in this book (Marilyn Monroe in Alberta).  Mr. Luxton called me on a Sunday morning and asked me to help him host some important movie people.  We opened the shop for Miss Monroe and her entourage, with a mob of photographers and onlookers plastered against the outside of the windows of the store.  It was my job to help her understand our displays that included stuffed animals, skins and many wonderful Indian handicrafts.

On one occasion Miss Monroe (she had her ankle bound) was sitting on her haunches trying to get a closer view of a fake animal in a glass case.  It was supposed to be a mermaid from one of our cold lakes.  When she attempted to get up she had great difficulty and I helped her to her feet to the catcalls and applause of the onlookers outside of the store.  Having been so close to someone so beautiful and famous was almost too much for me.  I have replayed that moment a thousand times since then, and have often questioned my personal feelings about the event.  Can you imagine falling for Marilyn Monroe at the tender age of 15.  Being in her presence at the Indian Trading Post was an odd sensation, since all of our moves within the store were amplified and exaggerated by the onlookers outside of the glass bowl; hooting and catcalling as a mob, each one trying to outdo the other.

Before she left the store I asked her if she would give me an autographed picture of herself, and she told me that she would call me from the hotel and I could pick it up.  The next day I received a call from her “lady in waiting” (a woman who was a little difficult) telling me that I should come to the hotel, ask to be shown to Miss Marilyn’s room and get the picture.  When I arrived in the lobby and people found out where I was going, I was immediately mobbed and loaded up with autograph books.  I arrived at her room where, in the presence of Otto Preminger and Joe DiMaggio (neither one I had ever heard of), Marilyn presented me with a personally autographed picture. After collecting the autograph books of the hotel staff, my brief moment with Marilyn Monroe was over.

In an odd way I did not see her as overtly beautiful.  In fact, I was surprised by her very ordinariness, an almost simple and innocent young woman who was lionized by this insane mob constantly surrounding her.  She wasn’t even allowed to have a hair out of place. In a way I felt sorry for her.

The picture she gave me has been a very special treasure all of these years, one that I will never let go.

I will try to get my hands on your play, since I think it would be fun to read about an event that ran parallel to my own experience.

Perhaps I could purchase a  copy of the play from you.

thank you for reading my story

Thank you for writing such a wonderful account of your encounter with Marilyn Monroe. It is quite an interesting story and you told it very well. I was bowled over by the similarities between your story and the play that I wrote entitled My One And Only. As you rightly observed there is a connection – but I conclude you must be unaware of how closely the play tells mirrors your own story.

The play centres around a boy named Scout, who was 15 years old when Marilyn shot the film in Banff, the same age as you were when you met Marilyn. My play imagines what might have happened had Marilyn and this boy had an affair. The notion was not so far fetched to me, as Marilyn herself was abused while in a foster home, something that is sometimes a factor in such cases.

My One And Only asks the question what would happen to the rest of your life if your first love was Marilyn Monroe? Would you ever escape it? The play uses what’s called a non-linear narrative structure – that is, it bounces back and forth between 1954 when Scout first met Marilyn and 1963 when Marilyn has died, as well as a few other pivotal dates in this boy’s life – to illustrate that Scout cannot ever escape this memory. It seems from your letter that you may have been similarly haunted by the memory of the day you met Marilyn, though to a much lesser degree.

I received your email on the day that I was travelling to Edmonton for a launch of the collection of the plays that you refer to. That evening we planned to read a selection from each of the plays, and I hope that you will be pleased to know that after reading from the first two plays I pulled out your email and read it out loud by way of introduction to My One And Only. I realize now that I ought to have asked your permission in advance, but I was too excited not to seize the opportunity. Rest assured that the twenty-odd strangers in Edmonton who also know of your story loved your letter as much I.

Your letter, with its surreal coincidences with my fictional play, set the stage for what became a very magical evening.

Since each one of these plays had been performed in Edmonton at one point over the preceding six years, I had been able to arrange in advance to engage some actors from the original casts, including April Banigan, the talented actress who played Marilyn. April had been involved in the very first workshop of the play – a process wherein a theatre hires actors to come in and read the play over several days, in order to assist the playwright in visualizing the play. In our instance, we read the result in front of a live audience: April in her wig and simple costume was such an effective Marilyn that she became my muse whilst I wrote that play. (Her photo graces the inside pages.) April arrived at the reading that night dressed in the same wig and with the same mole in the corner of her cheek.

Since the actor playing Scout had moved to Vancouver I was privileged enough to play Scout opposite the actor who had played the investigating policeman on the one hand and the actress who had been my muse on the other. The scenes we read culminated in their first kiss and their subsequent encounter at midnight in the Secret Cave and Basin. Even years after the play had premiered, the skilled April Banigan gave such an effective impersonation I felt as if I had been momentarily and magically inserted into the fictional world I had written. It was truly an out-of-body experience.

So when you ask in your letter “Can you imagine falling for Marilyn Monroe at the tender age of 15?” I feel compelled to smile inwardly and answer “yes, Fred, I can imagine that.”

In return for proving to me that the universe is not just a collection of random particles, and by way of thanks for whatever universal impulses brought your email to me that strange day, I would like to offer you a copy of the play as my gift. I see by your address that you live in London ON. My parents – who are the subject of the first play in the collection – live in London and have offered to deliver a copy to you.

I hope it brings you joy,

(*1)   Norman Luxton was a most interesting person who had lived a life full of great accomplishments and adventure.  When I worked for him he almost never talked of his exploits. So, with the help of the internet, I am now able to discover who he really was. I invite you to read about his seafaring adventures.